ON March 8, the Surrey RCMP Community Response Unit (CRU) executed a search warrant in the 1400-block of 160th Street. 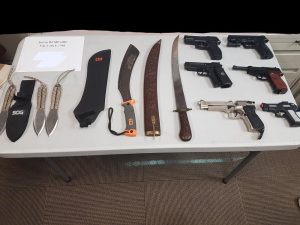 The residence which police searched is located approximately two blocks from a public secondary school.  During the investigation, police received information that many youths were attending this home to purchase drugs.

Officers from the Community Response Unit were assisted by the Surrey RCMP’s Youth Unit and the City of Surrey Bylaw Enforcement.

During the execution of the warrant, police seized approximately 600 doses of marijuana, 700 doses of psilocybin mushrooms, 500 doses of lysergic acid diethylamide (LSD), 1,800 doses of cannabis extract and more than $2,500 in Canadian currency. In addition to the illicit drugs and currency, police also seized six pellet guns and five knives.

Three men were arrested at the residence and released with future court dates. The names of the men cannot yet be released under the provisions of the Privacy Act, as charges have not yet been laid. The investigation is active and ongoing.

“Drug busts are often noteworthy because of the quantity or types drugs seized. In this case we have taken down an operation which targeted youth”, says Sgt. Winston Shorey, of the Surrey RCMP Community Response Unit. “These arrests and seizures are part of a wider, long-term effort to reduce the prevalence of drug trafficking in our communities.”

The Surrey RCMP say they continue to strive for long-term solutions and engage in a number of prevention, intervention and enforcement strategies with regards to youth and the drug trade.  For a complete list of the Surrey RCMP’s youth programs, visit their website.

Anyone with information about drug trafficking in their community is asked to contact the Surrey RCMP’s at 604-599-0502.

If you wish to make an anonymous report, contact Crime Stoppers at 1-800-222-TIPS or go to www.solvecrime.ca.

posted by: Rattan Mall - March 29, 2020
THE Vancouver Park Board is signaling its solidarity with the 7 p.m. movement to thank health care workers in the city who...

Order enables broader use of tech in COVID-19 response

posted by: Rattan Mall - March 29, 2020
THE B.C. government says the protection of privacy is a top priority for it, and so is protecting the health and safety...

Guidance to retail food and grocery stores operating during COVID-19

posted by: Rattan Mall - March 29, 2020
A Langley-based Facebook group called "COVID Silver Linings" is encouraging people to post the good things that are resulting from COVID-19.

From Vancouver Coastal Health: do your part, stay apart