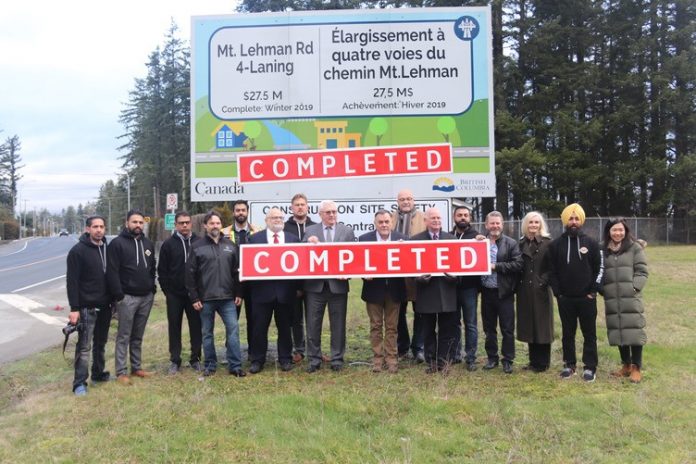 THE expansion of Mount Lehman Road between Great Northern Avenue and the Abbotsford International Airport has been completed.

“These important upgrades to Mount Lehman Road are helping keep traffic moving safely and smoothly in and out of our busy airport,” said Ron McKinnon, MP for Coquitlam-Port Coquitlam, on behalf of Catherine McKenna, federal Minister of Infrastructure and Communities, on Friday. “By working closely with our regional partners and municipalities, we will continue to get projects built that improve people’s lives and support strong local economies for years to come.”

McKinnon, Gary Begg, MLA for Surrey-Guildford, on behalf of Claire Trevena, B.C.’s Minister of Transportation and Infrastructure; Henry Braun, Mayor of Abbotsford; and Darryl Plecas, MLA for Abbotsford South, gathered at the site to celebrate the road-widening project, which has improved safety and efficiency for drivers, cyclists and pedestrians.

“Traffic continues to grow rapidly along the Gateway to Abbotsford,” Begg said. “We have improved safety by making intersections better, reduced lineups and delays by opening more lanes for drivers, and created more space for cyclists and pedestrians with new bike paths and sidewalks to encourage more active transportation. All of these upgrades bring welcome relief for people travelling to and from the Abbotsford airport.”

These improvements support the growing flow of traffic that is accessing the Abbotsford International Airport, as well as boosting safety for commercial and local traffic.

“The widening of Mount Lehman Road to the Abbotsford International Airport is a significant step forward for local and regional travellers and provides a needed link for the continued movement of goods and people to and from the Trans-Canada Highway corridor,” said Braun. “The City of Abbotsford greatly appreciates the federal and provincial governments’ continued investment in our community as we continue to build the hub of the Fraser Valley.”