THOUSANDS were treated to free drinks courtesy of Sikhs this weekend as part of religious commemorations aimed at raising people’s spirits.
The uplifting gesture was part of Chabeel Day, an international day of commemoration of the martyrdom of the fifth Sikh Guru, Guru Arjan Dev Ji.

Drinks were handed out across Canada – from Montreal to Vancouver – over this past weekend, including at the Nanaimo Pride Festival and at the Toronto Turban Up Festival, by various Sikh groups led by Khalsa Aid Canada, Guru Nanak’s Free Kitchen, Sikh Sewa Society Toronto, Experience Sikhi and others. Sikhs were doing the same thing in cities the world over. 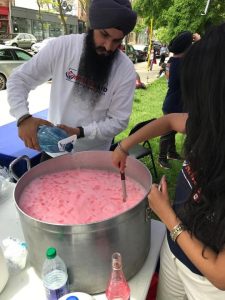 Khalsa Aid volunteer Jindi Singh said, “It was a great few days of community integration. Through this simple gesture of handing out a free cool, sweet drink on this warm day, we are able to put a smile on someone’s face and have a chat about why we’re doing it. We spoke to many people and hopefully pupils went away with a bit more understanding about the Sikh faith.”
‘Chabeel’ is a Punjabi word referring to a sweet, cool, non-alcoholic drink made up of rose-water syrup, milk and ice. Traditionally in India for hundreds of years Sikhs have offered chabeel to the general public on hot days, especially between May and June, when Sikhs remember the martyrdom of Guru Arjan Dev Ji.

In 1606 Guru Arjan Dev Ji refused to change Sikh religious scriptures as ordered by the tyrannical Mughal Emperor Jahangir in an effort to curtail the Guru’s growing influence in India. When Guru Arjan Dev Ji refused, He was tortured by being made to sit on a red hot plate whilst hot sand was poured over him.
Jasveer Singh of the Sikh Press Association, the organisation behind the campaign, said, “The basis of Chabeel Day and commemorating the Sikh Guru is about the concept of Chardi Kala, which means “ever-rising spirits”. Being able to handle a negative situation in a positive manner is something important to learn and understand when it comes to the Sikh faith.”

For more information and pictures on Chabeel Day, check out www.SikhPA.com/ChabeelDay.