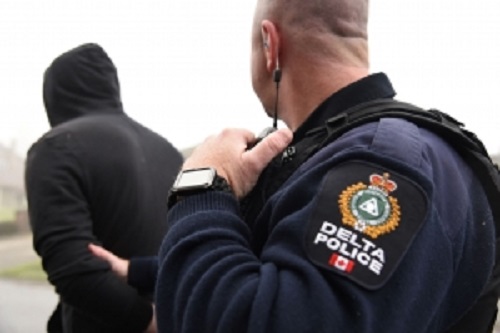 A recent call about a possible medical event led to Delta Police arresting a break and enter suspect.

Delta Police were contacted on January 4 just after 6 p.m. about a man potentially overdosing on the porch of a residence.

Police arrived and located a man in the Nordel neighbourhood of North Delta who said he required medical attention. While an officer attended to the man, another officer checked the area and determined there appeared to have been a break-in nearby.

Emergency health services were called to assess the man, and based on the evidence, the man was arrested.

“The investigation led police to believe the man had just committed break-ins in the area,” said Cris Leykauf, spokesperson for Delta Police.

Deisting is considered a prolific property crime offender. He has been remanded into custody and next appears in court on January 8.

Pedestrian killed in collision in Ladner