THE executives of Surrey’s six largest Sikh gurdwaras and the largest Hindu mandir are issuing a call to Solicitor General Mike Farnworth, who is currently reviewing the City of Surrey’s roadmap to introducing a new local police force, for a timely approval for transition to a municipal police force.

All seven institutions, whose congregations collectively represent a significant percentage of the city’s 168,000 South Asian residents, have signed and publicly released correspondence to the minister requesting immediate action in allowing the plan to proceed. 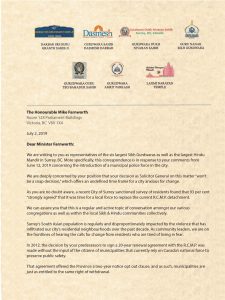 The South Asian community has been particularly impacted by the growing violence across Surrey’s residential neighbourhoods, and is anxious for a change in the maintenance of public safety, according to Moninder Singh, President of Gurdwara Sahib Dasmesh Darbar.

“We are tired of waiting for real change in Surrey’s policing, which is why all of our executives have signed this letter to Mr. Farnworth,” said Singh. “The BC government must listen to the people who voted in favour of Surrey Mayor Doug McCallum’s proposal last October.”

In 2012, the BC government signed a 20-year renewal agreement with the R.C.M.P., which is a decision that was made without the input of residents in municipalities that currently rely on Canada’s national force to preserve public safety. 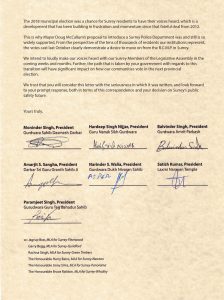 The palpable anger that this deal caused was reflected in the overwhelming support for the Safe Surrey Coalition, which ran on a three-pillar policy platform that pledged an end to the RCMP’s presence in the City of Surrey, the press release points out.

The unity that all temples are expressing in this call to the Solicitor General cannot be underestimated, notes Satish Kumar, President of the Laxmi Narayan Temple.

“I have never seen such collective support for any policy at the municipal level like I have with this transition plan to a local police force,” says Kumar. “The people have spoken loud and clear, and the only thing that is standing in the way of progress at the moment is the BC government’s review.”

The City of Surrey’s transition plan was presented to the provincial government last month, with Farnworth giving no indication of a time frame for approval other than stating he “won’t make a snap decision.”

The letter bluntly states: “We intend to loudly make our voice heard with our Surrey Members of the Legislative Assembly in the coming weeks and months. Further, the path that is taken by your government with regards to this transition will have significant impact on how our communities vote in the next provincial election.”

It was signed by:

RCMP supporters not giving up on sabotaging Surrey Police formation