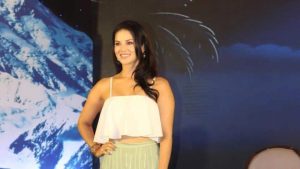 Sunny will be shooting for the song titled “Trippy Trippy” next month.

The song has been composed by music director duo Sachin- Jigar with lyrics penned by Priya Saraiya. Ganesh Acharya will choreograph the dance number.

“I have been working on it with director Omung Kumar sir and Ganesh sir. Rehearsals have already started. Ganesh sir who is a hard taskmaster has given me some really complicated steps. I’m trying my best to master them. It’s a peppy track which youngsters will enjoy,” Sunny said in a statement.

The actress, who has not yet interacted with Dutt, said she has been a fan of the actor for the longest time and is looking forward to shoot with him.

“The song comes at a crucial juncture in the narrative and we wanted only Sunny for it,” Omung said.

“Bhoomi” is a revenge drama that explores the relationship between a father and daughter.

Produced by T-Series and Legend Studios, the movie releases worldwide on September 22.