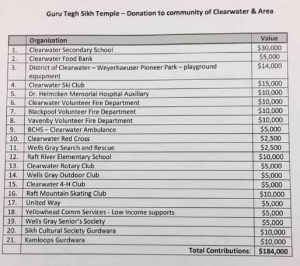 THE Sikh community in Clearwater announced at the District of Clearwater’s council meeting this week that they will be donating all $184,000 from the land sale where the Guru Tegh Sikh Temple stands to nearly two dozen groups, Radio NL 610 AM reports.

Clearwater Mayor Merlin Blackwell told NL: “I was not the only grown man in the room to get a tear in their eye. It is such a heartfelt, generous gift, with no strings attached.”

He added: “Some of these clubs and organizations have been struggling for years, especially a few of them like the ski hill that didn’t open this year.”

Temple President Narinder Heer said in a press release: “The first Sikh pioneers came to the areas in the 1960s, mostly working in the lumber industry… With the downturn of the lumber industry and aging population, the decision was made to sell the property as there are only a handful of families left.”

He added: “The Sikh community felt it was important to give back to the communities in the North Thompson where generations of families have lived and enjoyed for many years.”

Ten-thousand-dollar donations have also been made to the Clearwater, Blackwell and Vavenby fire departments, as well as the Dr. Helmcken Memorial Hospital Auxiliary, the Raft River Elementary School and the Raft Mountain Skating Club. Several other groups also were donated between $2,500 and $5,000.

The Sikh community also donated $10,000 each to two Sikh temples in Kamloops.

Blackwell told NL: “The public outpouring online and around town has been overwhelming. One of the comments from a member of the public was ‘thank you for showing us how to give again.’ And I thought that just said it all.”

According to the School District No. 73 (Kamloops-Thompson) website,Shelley Sim, Trustee, said: “Schools are an integral part of any community but in particular, a small community.  This generosity speaks to the giving nature that is symbolic of the Guru Tegh Sikh temple members. Many students will benefit from this beautiful legacy and we are grateful that the members saw value in giving so thoughtfully to both Raft River and Clearwater Secondary.”

“It was a heartwarming and humbling gift, leaving everyone who was a recipient of their incredible generosity feeling overwhelmed and so grateful,” said Lori Bradstock, Principal Raft River Elementary, who accepted a cheque on behalf of the school.

Principal Darren Coates also attended the event on Tuesday, April 2 and accepted the gift on behalf of Clearwater Secondary.

“This is a remarkable gift and will go a long way towards enhancing the learning of the students at Clearwater Secondary,” Coates said. 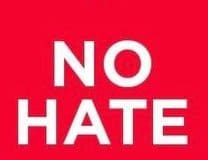 posted by: Rattan Mall - May 25, 2020
FOR each month of the calendar, Canadians reserve a time to honor specific cultures of our diverse Canadian mosaic, says the BC...

posted by: Rattan Mall - May 25, 2020
PEN America and the Asian American Writers’ Workshop on Monday released a joint statement from well over 100 writers, artists, actors, and creative professionals...

posted by: Rattan Mall - May 25, 2020
THE 2020 summer camping season has arrived, giving people in B.C. more opportunities to get outside and connect with nature as most...

Province supports tourism marketing organizations to be ready for recovery

posted by: Rattan Mall - May 25, 2020
FIFTY-NINE B.C. community destination marketing organizations (DMOs) severely impacted by COVID-19 travel restrictions will be supported with a $10-million grant from the...

One dead in rollover collision along Highway 1

posted by: Rattan Mall - May 25, 2020
RCMP and the BC Coroners Service are investigating the circumstances surrounding a rollover collision that claimed a life along Highway 1 near Langley...