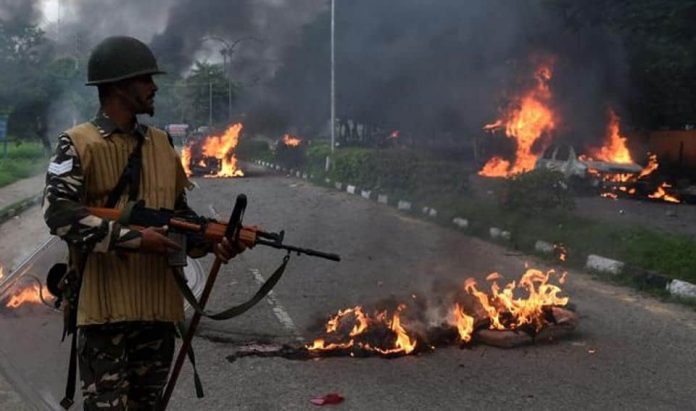 Chandigarh (PTI): Haryana and Punjab were on high alert on Monday with authorities describing the situation as “challenging” and making it clear that they will not hesitate to “shoot at sight” those endangering innocent lives following the sentencing of the Dera Sacha Sauda chief.

A multi-layer security cordon manned by police and 23 companies of paramilitary forces has been thrown in and around Rohtak and also around the Sunaria Jail.The Army has been kept on standby.

Dera Sacha Sauda chief Gurmeet Ram Rahim Singh is lodged in Sunaira Jail and CBI Judge Jagdeep Singh is being flown to Rohtak. The sentence is expected to be handed out at around 2:30 pm.

Authorities are geared up to prevent a repeat of the mayhem on Friday last following the 50-year-old sect chief’s conviction. The violence claimed 32 lives in Panchkula and six in Sirsa, besides leaving over 260 injured.

Talking to reporters, the DC said, “It is a challenging situation, but we are prepared”.

“We are prepared to deal with any unscrupulous element who may try to create trouble…if there is any such element who indulges in any act of violence endangering innocent lives, if he does not pay heed to warnings then shoot at sight will be used against him. Action will be taken as per situation demands,” he asserted.

To another question, he said the Rohtak administration and security personnel were dealing with a “dynamic and challenging situation”.

“We have clarity of thought, we are not confused. If we feel any person is endangering lives of innocent people and is causing damage to property, then shoot at sight will be used (to deal in such a situation),” he said.

“Maintaining law and order is the top priority for the Haryana Police today,” DGP B S Sandhu said.

A special court room has been made within the Sunaria jail, Rohtak Range IG, Navdeep Singh Virk said.

“The judge will be flown in by a special helicopter and will land in the helipad near to the Sunaria jail (on the outskirts of Rohtak city),” Virk said.

About security arrangements put in place, Virk said Haryana Police was fully geared up to deal with any situation and police from neighbouring districts too has been deployed.

“We have also been provided 23 companies of paramilitary forces by the Central government. We have sufficient forces and we have deployed them. We are on our toes 24×7 and we are 100 per cent certain that there will be no untoward incident,” he said, adding the Army, however, will be on standby.

He said it will be ensured that no Dera follower is allowed to enter entire Rohtak district or to move near to the jail.

“For that we have made set up special barricades across entire Rohtak district. Also, we have made special arrangements to ensure safety of Rohtak and neighbouring towns. For this purpose, several barricades with strong police presence have been set up,” he said today.

The DC said, “people do not have any reason to be afraid as stringent security measures have been taken”.

The police have sealed ten “naam charcha ghars” (congregation centres) of the Dera in Rohtak police range. In all, 103 such centres have been searched across Haryana. A sedition case has been slapped against two close aides of the sect head after the violence in Panchkula on Friday.

Appealing to the people not to enter the district without any specific and urgent reason, Rohtak DC Kumar said every person entering Rohtak was being checked.

If during checking, any person fails to produce proof of identity or specify reason for visiting the district, then he would be taken into custody, he said.

The DC said prohibitory orders under Section 144 of the Code of Criminal Procedure (CrPC), prohibiting assembly of five or more persons, and carrying of firearms and other weapons, were already in place in the district.

All routes to the Sunaria jail in Rohtak, where the sect chief has been lodged, have been sealed.

The Dera head, who wields considerable political influence and is flocked by political leaders from various parties, particularly during the time of polls, was lodged in Sunaria jail after his conviction on Friday.

After the violent attacks on media crews allegedly by Dera supporters in Panchkula on Friday, the police have made special arrangements at Rohtak for them. Police said a designated place has been earmarked for them to allow them to cover the court proceedings today.

Sirsa, the sect headquarters, meanwhile continues to be under curfew.

Police have registered 52 cases in connection with the violence which left a trail of destruction, particularly in Panchkula and Sirsa in Haryana, and arrested 926 people.

As a precautionary measure, schools and other educational institutions will remain shut in Haryana today while these will also remain closed in sensitive districts in Punjab.

in Haryana, curfew now remains clamped in Sirsa only.

Earlier, it was clamped at many places including Panchkula and Kaithal.

There have been no reports of violence from anywhere in Haryana and Punjab since Saturday.

Train operations in Punjab and Haryana, severely affected by violence in two states, have been restored, except for the Delhi-Rohtak-Bathinda section, a railway ministry statement said in New Delhi.

The security clearance for the section is awaited from state authorities, it said.

Mobile Internet services will remain suspended in Haryana and Punjab till 11:30 am on Tuesday. Internet lease lines on the premises of the Dera Sacha Sauda headquarters at Sirsa will also be suspended till then, officials said.

At many sensitive places in Punjab too, security forces conducted flag marches and kept a tight vigil in sensitive areas.

Punjab was maintaining a vigil in sensitive districts falling in the Malwa region including Bathinda, Sangrur, Moga and Patiala, where there is sizeable presence of Dera followers.

Meanwhile, authorities in Punjab and Haryana have started identifying movable and immovable assets of the cult on the directions of the high court, officials said.

Banks have been asked to provide details of accounts of the dera.

The Punjab and Haryana High Court has asked the two states to submit by Tuesday a list of dera’s properties and assets which can be attached in case it is found that they were responsible for property damage after Singh’s conviction.

posted by: Rattan Mall - May 27, 2020
ON Monday, June 1, Coast Mountain Bus Company (CMBC) will resume fare collection and front-door boarding on buses throughout the region.