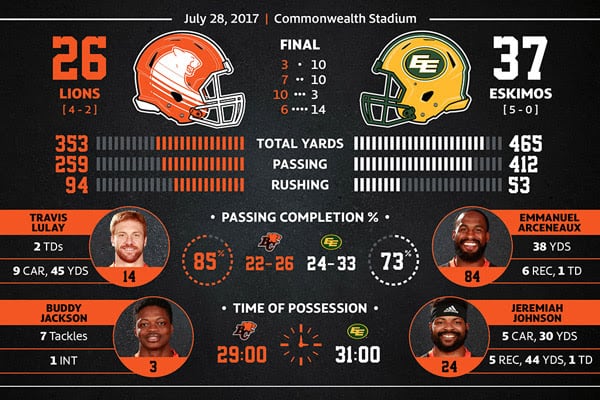 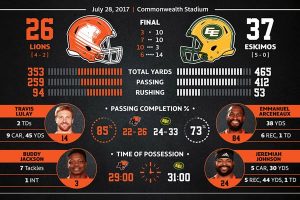 EDMONTON: As the old saying goes, “all good things must come to an end.”

Your BC Lions’ road dominance hit a bump in the road with a 37-26 loss to Mike Reilly and the Edmonton Eskimos on Friday night.

Reilly passed for 409 yards, two touchdowns and also ran for two more as the Eskimos improved to 5-0 on the young season. Travis Lulay, playing his 3rd straight game in place of the injured Jonathon Jennings, passed for 259 yards and a pair of touchdowns, but also threw a couple of costly interceptions.

The veteran pivot was making no excuses afterwards.

“If you dig yourself a hole early against a good football team, on the road, that’s too good a team,” said Lulay after the final whistle.

Reilly and company had a well-balanced attack from the get go as he completed a 65-yard pass to Duke Williams on the first play from scrimmage. Two plays later, the Eskimos’ pivot found Brandon Zylstra in the end zone for an early score. Zylstra finished the night with 107 yards receiving, A real backbreaker game in the second quarter when Vidal Hazelton scored on a 108-yard catch and run- the longest completion of any kind in Eskimos franchise history- to extend their lead to 17-3. Lulay responded with a seven-play, 73 yard drive capped by a Manny Arceneaux touchdown catch and the visitors trailed 20-10 at the half.

They rallied to tie it at 20 in the third quarter when Lulay completed a touchdown pass to Jeremiah Johnson when Wally Buono elected to go for it on third down from the Eskimos’ five.

In the 4th quarter, things got a little crazy. With the Eskimos up 23-20 and without kicker Shaun Whyte due to injury, they elected to go for it on 3rd and goal from the 14. The pass was broken up by Loucheiz Purifoy in the end zone, but the Eskimos would challenge for pass interference and win. Reilly then punched it in for a two-score lead and the floodgates were open. The sideline was in disbelief when the call was overturned, but there was no excuses made when this one ended.

“We tied it up, but from that point on you have to tip your cap to their offence. They kept us off the field for pretty much the last quarter and a half. Edmonton was the better football team tonight, “added Lulay.

Buono also minced no words after a second loss to the Eskimos in 2017.

“The difference is we played a better football team and we continually self destructed,” explained Buono.

“They’re better right now on the line of scrimmage than we are. Until we prove that, it’s going to be the same old story.”

Buono’s team falls to 4-2, and will return home for a showdown with the Saskatchewan Roughriders on Saturday, August 5 at BC Place.

11.2- The number of yards averaged by Reilly and company on second down. Lulay pretty much said it: they need to do a better job of getting off the field in those crucial situations.

71- The total number of yards in penalties by the visitors. Command centre luck or not, that will be a big talking point going into next week.

“Tonight I gave what I had, and I felt that we had a great game plan and scheme to come win. Our lack of execution didn’t go as planned. I felt like as a team we gotta be better, boils down to three things: Discipline, focus and effort. And like the old saying goes, ‘in order to start winning you have to stop losing.’ So it’s on to the next Game. And the Goal is to be 1-0.”- Arceneaux on battling through his injuries and the lack of execution on offence.

All week long they spoke about the need to win the line of scrimmage and Edmonton came out on top on both sides of that battle. Lulay was sacked four times and the Eskimos’ offensive line allowed Reilly plenty of time to operate. It was eerily similar to the battles that took place in week one at BC Place.

The overturned call in end zone that granted the Eskimos new life could be up for debate, especially when you consider the one Buono challenged on the next series was not changed. But you also have to consider the fact that Edmonton drive was previously extended when Buddy Jackson was flagged for illegal contact. Instead of a field goal, the rest was history. Perhaps the most unfortunate aspect of the whole thing was Edmonton chewed up over six minutes of clock on that 14-play drive. As far as the incomplete pass that Buono challenged, thinking it was a lateral and fumble recovery? Perhaps a little too close to be overturned on replay.

The 108-yard Hazleton touchdown is a play you never want to be on the receiving end of. It was an all too familiar scene from week one when Reilly used that big arm, and some capable weapons, to his advantage. The Eskimos were able to flip the field position on more than one occasion, and that big play had to be the result of a mix up in the secondary. The fact it was all set up by a Lulay interception while they were knocking on the door has to sting even more.

We have to commend the club’s 9-4 regular season mark away from home since the start of last year. However, none of those victories have come against the stiff competition of Edmonton, Calgary or Winnipeg. This game was the largest margin of defeat in regular season road games against those clubs, so they have been competitive against them, but they need to start winning some of them once the stretch drive really begins.

Perhaps the most valuable member of this team this season? How about Jeremiah Johnson? He has a touchdown in each of the club’s six games and has proven his ability as a duel threat out of the backfield.

It should go without saying, but there is still plenty to be decided. Along with a rematch at BC Place October 21st, the Eskimos have three meetings remaining with Calgary, and two each with Winnipeg and Saskatchewan. The flip side is Edmonton assured themselves of winning the season series against BC, should any tiebreakers come into play.

TJ Lee will be re-evaluated after suffering an elbow injury in the second quarter, The early prognosis indicates he could miss some time, but that remains to be seen. Ronnie Yell went back in the game after getting banged up in that eventful 4th quarter.

posted by: Rattan Mall - January 26, 2020
RIDGE Meadows RCMP tweeted on Saturday that they could confirm they were investigating an incident involving a man jumping onto a...

Province gives $5 million for support for women and children affected...