TALK of loyalty and honour in gangs!

Former associates of the three who have been charged with the first-degree murder of Red Scorpion gang leader Jonathan Bacon in August 2011 — Jujhar Khun-Khun of Surrey, Michael Jones of Gibsons, and Jason McBride of North Vancouver – will be testifying against them at the trial that got underway (finally!) at the Supreme Court in Kelowna.

Just to refresh your memory after almost six years after the event, Bacon, Larry Amero, a full-patch Hells Angels member from White Rock, and James Riach of the Independent Soldiers along with two women, one of whom is related to several Hells Angels members in Haney, were attacked in Kelowna. While Bacon was killed, Amero and the two women sustained non-life-threatening injuries. Riach, who was also injured, fled the scene.

Khun-Khun, Jones and McBride were arrested on February 22, 2013, and charged with the first degree murder of Bacon as well as four counts each of attempted murder.

Manjinder “Manny” Hairan, 29, who was shot dead on January 15, 2013, in Surrey, was also involved in the Kelowna shooting.

The then Combined Forces Special Enforcement Unit of British Columbia (CFSEU-BC) Chief Superintendent Dan Malo said at the time: “On August 14, 2011, at 2:41 in the afternoon, a group of unknown assailants opened fire at the occupants of a white Porsche Cayenne parked at the entrance to the Delta Grand Hotel and Resort.

“ … Mr. Bacon was fatally wounded and his four associates were badly injured by gunfire. One of the young ladies Leah Hadden-Watts is now a paraplegic because of the injuries she suffered that day.

“Bacon, Amero and Riach were in Kelowna on that weekend as members of a recently formed criminal alliance commonly called ‘The Wolfpack,’ yet all were from distinct criminal groups. Amero was a member of the Hells Angels, Riach, a member of the Independent Soldiers, and Bacon of the ‘Bacon Brothers’ or Red Scorpions.”

Malo noted: “The flashpoint of this gang violence began with the murder of Gurmit Dhak in Burnaby in October of 2010. But the Bacon shooting, as it was commonly called became a starting point for a cascade of violence we saw repeated throughout B.C.”

Gurmit Dhak, 32, was shot dead in execution style in a black BMW SUV on October 16, 2010, at a parking lot of the Metrotown Shopping Centre, and his brother Sukhveer (Sukh) Dhak, 27, was gunned down on November 26, 2012, along with his bodyguard, Thomas Mantel, 30, in a Burnaby hotel.

BESIDES the disloyal former associates, Crown has a loyal “friend” that doesn’t lie – DNA!

As Vancouver Sun’s Kim Bolan reported, prosecutor Dave Ruse said in his opening statement in court on Monday that there was DNA evidence linking all the accused to clothing that they threw away after the murder.

Here’s another hint for gangs: DON’T throw away stuff – BURN it!

Or even better: DON’T join gangs, to begin with!

Ruse said the former associates would testify that the three accused and Hairan were in Kelowna to kill Amero, Bacon and Riach after learning that they were partying there. Sukh Dhak believed that those three were responsible for his brother Gurmit’s murder. The accused spotted a large boat along the waterfront behind the Delta Grand Hotel that McBride recognized as Amero’s boat. So the Dhak associates went to the hotel and waited for their targets.

When Amero, Bacon and Riach along with the two women, Hadden-Watts and Black got into Amero’s vehicle, a Ford Explorer pulled up to his vehicle and men inside and outside the Explorer opened fire before taking off in the vehicle.

A Glock and two Norincos allegedly used in the crime were found at a construction site north of Kelwona, while the clothing was found in a recycling bin somewhere else.

A Mountie who rushed to the scene related in court that the driver of the white Porsche Cayenne, who was Amero, was slipping in and out of consciousness and was covered in blood and broken glass. Hadden-Watts had a gaping wound on her back. And next to her was a wounded Lyndsey Black who was crying and screaming. Bystanders had pulled Bacon out of the vehicle and were attempting CPR.

During the week, one witness testified that they saw two masked men in black clothes shooting with “machine guns” at the Porsche. Another witness said there were two or three gunmen with hoods over their heads, so she could not see any faces or skin.

One witness came face-to-face with a masked gunman outside the hotel just before he killed his target. The shooter aimed his gun toward her and her daughter and another shooter also looked at them. Then the gunmen continued firing at the Porsche that hit a tree and then a wall. She added that one of the shooters walked up to the driver’s side and fired more shots, Bolan reported.

One witness testified he saw two individuals in black clothes chasing the vehicle and firing between 40 and 50 shots.

One witness related how he pumped Bacon’s chest to keep him alive. He also saw Amero sitting in vehicle just staring ahead, apparently in shock. He instructed Amero to put his hand on a wound on his stomach.

He saw Bacon lying in a fetal position with his legs were drawn up. He had no pulse. He did CPR on him and his pulse returned. Paramedics later took over.

For all the details reported by Bolan, visit www.vancouversun.com. 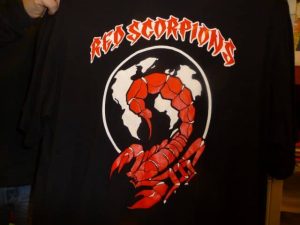 INDEED, so much for loyalty and honour in gangs!

I have written about this many times in the past. Back in March 2014, I noted how the false glamour of gangs was exposed so vividly at the ongoing Surrey Six trial.

I wrote: “The hollowness of the concept that gangs are like families with loyalty and they have a great time was graphically brought out by the testimony of Crown witness Y (who can’t be named because of a court order protecting his identity).

“… The witness, who was a protector of Red Scorpion leader Jamie Bacon told court that he later realized that loyalty among criminals was “just a big mirage.” He said: “So many of the homicides that you hear about usually end up being by ex-friends.”

“He decided to become a police witness when he realized that the gang members were trying to kill him. So much for family and loyalty!

“He also revealed how he and other gang members, including Jarrod Bacon, were addicted to the powerful painkiller oxycodone because it ‘took the edge off’ when there were “so many different people trying to kill you.””

I also pointed out that in December 2013, Red Scorpion member Cody Haevischer’s former girlfriend, who could only be identified as KM as she is a protected witness, testified that she was “pretty stressed out” because she felt the police were looking for her. She said that after the murders, the gang became paranoid about police and things started to fall apart. The tensions and infighting within the gang intensified as they realized that police were watching them.

KM said she really didn’t want to become a witness because the gang members were “my family and I loved Cody more than anything.” She “hated cops” because she felt she was a gangster herself.

But she had a rude awakening.