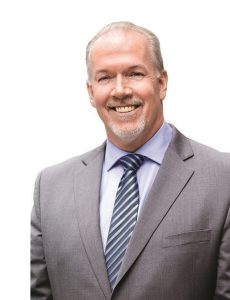 FOR 16 years, the B.C. Liberal government had been operating under the influence of big money, putting the wealthy first, and leaving everyone else behind.

This week marked the end of a busy fall session of the legislature. Our government is doing things differently, collaborating with the Green Caucus, and taking the first steps to make government work for everyone, not just the people at the top.

That includes working across party lines to pass significant legislation to take big money out of politics, give people a say in a fairer voting system, and protect renters from unfair rent hikes. We’ve also taken concrete steps to make life more affordable, improve the services people count on, and create good jobs throughout B.C.

Under the previous government, B.C. gained an international reputation for being the “wild west” of campaign fundraising. They took tens of millions in big money donations while looking out for the interests of their wealthy donors. The wealthy and well-connected came first and people paid the price.

We reformed campaign finance rules so that government’s actions and decisions benefit everyone, not just those with deep pockets. The days of limitless donations, lack of transparency and foreign and big corporate influence in B.C. politics are over.

Our September budget update included funding to build more than 1,700 units of affordable housing for families. We’re working hard to increase the supply of housing, to find ways to curb speculation in B.C.’s housing market, and to get thousands of modular housing units online to help people off the street.

We’re working to make life more affordable for people across the board. Our government cut MSP premiums by 50 per cent, and we’re working towards completely eliminating this unfair fee altogether. We removed unfair bridge tolls, increased income assistance and disability payments and made adult basic education and English language learning tuition free. And we’re tackling rising costs at ICBC and BC Hydro.

To improve education, we increased funding by $681-million for our kindergarten-to-Grade 12 education system over three years, and added more than 500 trades training spaces at B.C. colleges and universities, and made college and university tuition-free for former children in care.

We invested $322 million in province-wide action to stem the overdose emergency and help save lives, and established a standalone Ministry for Mental Health and Addictions as part of our commitment to improve the services people rely on.

And we’re getting to work creating good jobs and a sustainable, innovative economy that puts people first.

Instead of focusing on one sector to create jobs, we’re working to strengthen traditional industries like forestry and mining, while supporting small business, tourism, agriculture, manufacturing, technology and innovation.

We increased the hourly minimum wage to $11.35 an hour, established a fair-wage commission to work towards a $15-an-hour minimum wage in B.C., and lowered the small business tax rate from 2.5 per cent to 2 per cent.

Our government is also supporting people, communities and businesses affected by the recent wildfires, standing up for B.C.’s interests in the face of the Kinder Morgan pipeline expansion, making reconciliation with Indigenous peoples a cross-government priority, and making B.C. a leader in the fight against climate change.

It’s time for B.C. to work for everyone, not just the few at the top. We’re doing things differently, and working hard to make life better for people.

These are just the first steps. There’s much more to come.

‘This session will deal with immediate priorities that will help build...