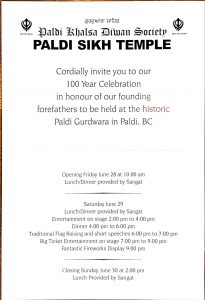 PALDI Khalsa Diwan Society’s Paldi Sikh Temple is inviting people to their 100 Year Celebration in honour of their founding forefathers at the gurdwara in Paldi. The celebration started on Friday (June 28). On Saturday there will be entertainment on stage from 2 to 4 p.m. Lunch and dinner will be provided by the Sangat. There will be a traditional flag raising and short speeches followed by entertainment on stage from 6 to 9 p.m. followed by a fireworks display. The celebration wraps up on Sunday at 2 p.m. with lunch being provided by the Sangat.

For more on Paldi, visit our website at voiceonline.com:

“MY Book “PALDI: Two Cultures, One Heart”, was inspired by a small village called Paldi, situated several miles from Lake Cowichan, Vancouver Island, BC, where I grew up. A mill was built there by Mayo Singh Manhas in the early 20th century, and as workers immigrated to Canada from India, China and Japan a settlement was established. It is probably Canada’s earliest example of several ethnic groups living and working together harmoniously as one large family. Cultural differences enriched the village, giving it a unique blend of traditions, food and language. It was home to all, but as time passed, the mill closed, and nearly all the families moved away.

“When I was a young child, however, it was a thriving village of about 1,000 inhabitants. I was often taken to Paldi by my father for a Sunday drive, and I was mesmerized by the old wooden houses, the general store and the sight of women in colourful Punjabi suits and men wearing turbans. Scents of exotic spices wafted from open doors, and I felt as though I’d entered a magical world, unlike anything I’d experienced previously.

“The elementary school in Paldi only went up to grade five, and then the children were bussed to my school in Lake Cowichan. Every class had its share of Paldi kids, and I was fascinated by the clothing, accents and quiet demureness of the girls with their long braided hair. I became close friends with two of the girls, and when I was about 15, I attended the wedding of young Sikh woman who was a friend of my family. It was an enchanting ceremony in the Gurdwara, and later a sumptuous meal served outside, where we sat on the grass under a sunny sky.”

“ONE day in 2007, I found out that there was another village named Paldi, in Punjab, India, and that the two were directly linked. Mayo Singh Manhas and a friend Nagina Singh, were the first two inhabitants of Paldi, India, to emigrate to North America. After some years in the USA, Mayo Singh started his mill on Vancouver Island, and the village grew around it. Originally it was simply called “Mayo”, but in 1936 it was changed to “Paldi” in honour of Mayo’s Singh’s home village.

“When I learned of this connection between the two Paldis, I felt tingles rush up my spine, and suddenly my mind was flooded with ideas. Over the next 1 ½ years these ideas were woven together to create PALDI: Two Cultures, One Heart.”

“I had sought permission from a Punjabi author to use one of her poems, and we had started up a correspondence. Nirupama invited me to speak at the Chandigarh Press Club in 2010, and again in 2012 to speak at Dikshant International School. This second time she took me on one of the most thrilling adventures of my life, to the village of Paldi, Hoshiarpur District, Punjab. It was a long drive, and after a couple of hours the highway narrowed to a small road that ran through countryside and small villages. From time to time, Niru would say, “it should be about 20 minutes now” and then 10 minutes, then 5 … and suddenly I saw the striking pink entrance gate with its sky blue words “Nagina Singh, Mayo Singh Memorial Gate, Paldi.” My heart seemed to expand, and just as we were about to enter, I said “Please, let me get out of the car, I must walk into the village”.” 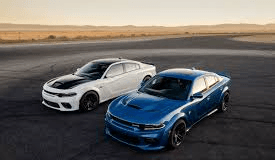