THE City of Surrey announced on Monday that it has concluded its public engagement process for the planned transition to a Surrey Police Department. Over a five-week period, 23 public engagement events were held across Surrey’s six town centres.

The results of the Citizen Consultation Survey are being released today.

A total of 11,103 survey responses were received.

The following are some of the key findings from the survey:

– It’s time that Surrey had a police department that is locally led:

93% Strongly Agree/Agree
– I want police officers to build their career in Surrey, so they know the community well:

98% Strongly Agree/Agree
– I believe our police department should prioritize its efforts based on what is important to Surrey citizens: 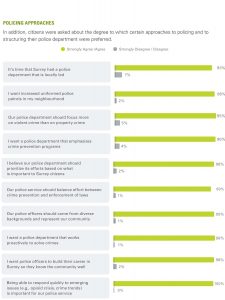 “The results of the survey responses speak volumes about the overwhelming support the citizens of Surrey have for the creation of a Surrey Police Department,” said Surrey Mayor Doug McCallum. “It is clear to me that the people of Surrey are ready for the switch to a city police department and it is my desire to deliver on their wishes. I sincerely hope the Solicitor General can render his decision soon. We have a detailed plan in place, and we are ready and eager to start work on the formation of a Surrey Police Department.” 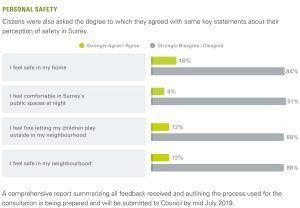