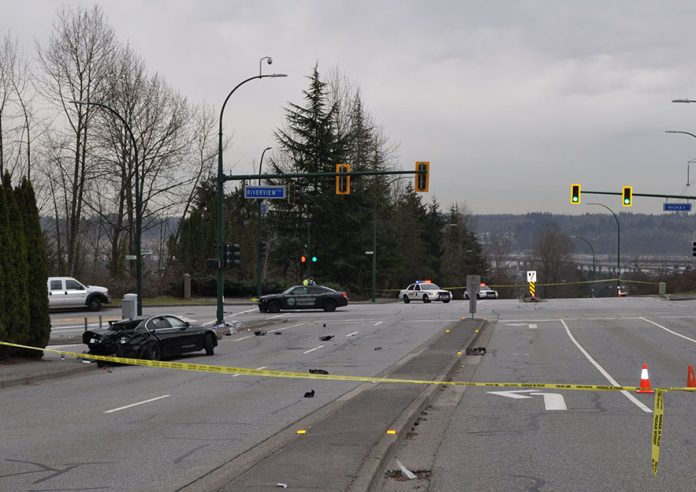 ALMOST one year after a collision that killed a 13-year-old Coquitlam girl, a single charge under the Motor Vehicle Act has been laid against one of the drivers involved in the crash.

On March 25, at about 3 p.m., a black, 2012 BMW 328 collided with a black, 2010 Dodge Charger at the intersection of Mariner Way and Riverview Crescent in Coquitlam. After the collision, the BMW spun into a group of pedestrians waiting at the crosswalk, killing the girl and injuring a boy.

“It’s the job of the police to do a thorough and impartial investigation,” said Coquitlam RCMP Cpl. Michael McLaughlin. “This investigation included appeals for witnesses, video review, collecting and reviewing technical data, and a subsequent collision-reconstruction where we shut down the road. Police forwarded the results to the BC Prosecution Service for review, and ultimately this single charge was approved.”

The driver of the BMW, a 27-year-old Coquitlam man, is facing the following charge: one count of drive without due care and attention.

No further charges are expected as a result of this investigation.

PHOTO OF THE DAY: A tranquil Fraser River on Wednesday

posted by: Rattan Mall - April 1, 2020
A resident of the Swedish Assisted Living Residence and two residents at Chartwell Cedarbrooke Retirement Residence have been diagnosed with COVID-19. The residents...

Surrey’s Gagandeep Dhillon charged in relation to over $458,000 in fraudulent...

posted by: Rattan Mall - April 1, 2020
CHARGES have been laid in relation to a multi-jurisdictional fraud investigation that involved numerous victims and hundreds of thousands of dollars’ worth...

posted by: Rattan Mall - April 1, 2020
GURDWARA Dukh Nivaran Sahib Surrey is requesting people who are under self-isolation to contact them if they require groceries or someone to...

Police looking for more victims and witnesses after arrest of music...