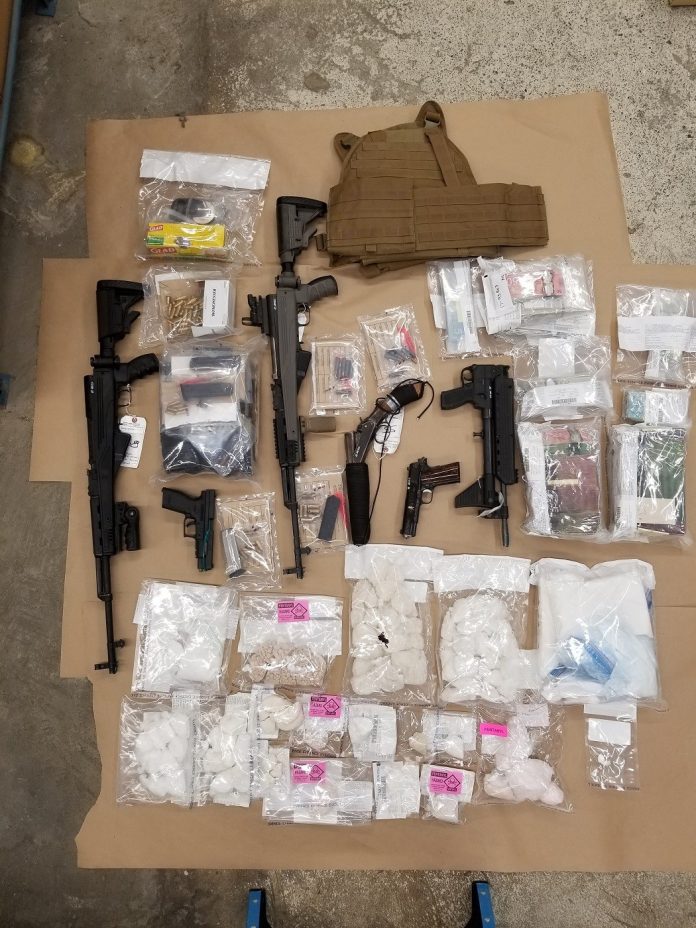 RCMP on Monday announced significant developments in the case. In addition to charges against Abd’l Malik Loubissi-Morris, which were announced in December 2019, a further arrest, additional charges, and a significant seizure of evidence has taken place.

This investigation began on July 9, 2017, following a shooting that took place in the 7600-block of 147A Street. The shooting resulted in injuries to an innocent bystander, a 62-year-old woman, who was visiting Surrey from Ontario. The Surrey RCMP Serious Crime Unit immediately took conduct of the investigation and entered into a conspiracy to commit murder investigation that involved a number of police investigative techniques.

Back in July 2017, The VOICE had reported that investigators believed that those who had been targeted fled in a black Hyundai vehicle.  The Hyundai was last seen with front-end damage; the bumper had fallen off.  The suspects were seen driving away in a red pick-up. Moments later, police received reports of a red pick-up on fire in the 9000-block of 150th Street. Witnesses reported that two males were seen fleeing the area. Surrey RCMP Serious Crime investigators believed that this was a targeted event between two parties that were known to each other in some manner.

As the investigation advanced, it expanded to include concurrent investigations in Vernon and Kelowna.  The Combined Forces Special Enforcement Unit (CFSEU), and the Kelowna and Vernon RCMP, worked in a coordinated effort with the Surrey RCMP, obtaining numerous judicial authorizations, including a search warrant for a residence in Kelowna.  As a result of the combined investigations, police located and seized cell phones, approximately $177,000, significant quantities of fentanyl, cocaine, heroin, methamphetamines and ketamine, as well as six firearms.

On January 30, charges were laid against Abd’l Malik Loubissi-Morris, Tien Roy Mai Dang, and Noah Didhra.  Each of these men are facing 15 separate charges, including conspiracy to commit an indictable offence; possession of a controlled substance for the purpose of trafficking; possession of the proceeds of crime; and possession of a firearm.

Abd’l Malik Loubissi-Morris has been in custody since his arrest on December 11, 2019, and Tien Mai Dang was arrested on January 30 without incident.

Didhra’s laywer, Tom Doust, emailed The VOICE on Wednesday: “Mr Didhra turned himself in this morning in Vancouver on Kelowna Provincial Court file #93751-1 (nothing about a shooting). When the time comes to do so my client intends to plead not guilty on all matters.”

“Projects of this size and complexity take a significant amount of time, resources and specialized skills,” said Superintendent Elija Rain. “A major contributor to the advancement of this investigation was the partnerships we have with CFSEU and the RCMP in Kelowna and Vernon. We extend our gratitude to every police officer and employee whose hard work helped to bring this file to a successful conclusion.”

Surrey RCMP: 17-year-old male has been located and is safe