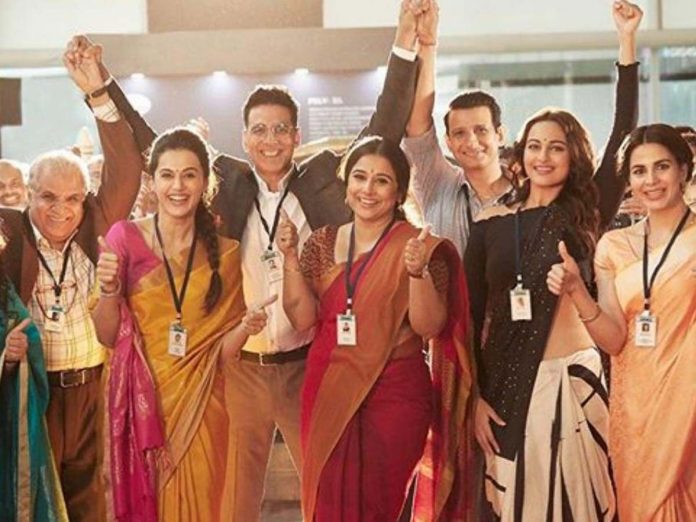 But that is IMPOSSIBLE— This is a recurring line throughout Mission Mangal, and practically every character says it emphatically with an air of despair. But you forget, when you have Akshay Kumar around with a very fiercely determined Vidya Balan, how is anything impossible? And so, that’s what Mission Mangal is all about, achieving the unthinkable. The film tells the inspiring tale of India’s first Mars Mission, Mangalyaan, which was launched in 2013. Mission Mangal begins with the failure of GLSV Fat Boy, and Akshay heroically taking the blame for someone else’s mistake. And so, he is shunted over to the Mars Mission, which no one expects anything from.
But Akshay, who plays the role of Rakesh Dhawan is seemingly chilled. He doesn’t believe in wasting a laddoo and enjoys humming cryptic songs about failure. He is a quirky scientist, with the heart and mind of Akshay Kumar as he doesn’t mind jumping across tables to prove a point or telling some painful bad jokes, reminiscent of his Housefull stints. Not all jokes though, Akshay is best when he is snarky.
Nevertheless, his interest in the Mars Mission is reignited after seeing Vidya Balan’s unfailing enthusiasm to make it a resounding success. It is far from easy, as apart from scientific challenges they are faced with a cynical Dalip Tahil, who is the closest to being a villain in the film. He is from NASA and he thinks he is the cat’s whiskers. But, as Akshay says coolly, you need a strong opposition party to push you to victory (Yes, we got the hint there, Akshay). Tahil gives them a team of inexperienced and new scientists, Taapsee Pannu, Kirti Kulhari, Sonakshi Sinha, Nithya Menen and Sharman Joshi.
The film shows how this team of initially disinterested and troubled scientists finally achieve the impossible. The film’s trailers and posters received much flak as Akshay Kumar seemed to have the most prominence, as compared to the women. To be honest, while the film initially does seem to play up Akshay in every way, Vidya is keen to not let that happen. There is a tough competition between the two on who can give more motivational analogies to their team, along with Akshay’s trademark dose of patriotic speeches, though slightly subtle this time.
Using the example of fried puris and innumerable cricket metaphors, they explain rocket science to you, at the risk of even oversimplification. There is no doubt that Vidya shines in her role and at times even Akshay seems to consciously move to the background and charitably lets her take over. It is a shame that the ever-reliable Taapsee takes the back seat and Nithya Menen remains quiet like her character with hardly any discernible personality traits.
Sonakshi plays the role of a woman who has more faith in NASA than ISRO, and it takes a couple of empowering speeches from Vidya and Akshay to change that. No really, she discovers the solution to a pressing problem in one night after being shouted at by Akshay. Sharman Joshi has a couple of hilarious punch-lines, that actually make the intense moments lighter.
Mission Mangal knows that it needs to cater to the masses as well, so it strives to go easy on the scientific explanations, and puts it in comprehensible words. If it is a scientific film at one point, it is also a mass entertainer the next. Director Jagan Shakti knows what his audience needs from an Akshay Kumar film. Shakti works hard to ensure that the film does not lose control at points and tries to keep the balance between showing the personal lives and the professional lives of the scientists, at the risk of coming across slightly fragmented at points.
The second half has all your attention, and the final climax is a nail-biting finish, though you obviously know what is going to happen. The visual effects of the Mars orbit have been done brilliantly, with the appropriate music to match the tension as well. It is fascinating to see the journey of the satellite’s journey from Earth to Mars. This is one of the film’s strongest points. There are not too many songs in the film, which is actually a relief. Songs like Shabaashiyan give the film a pleasant feel.
Despite its flaws of excessive sermons and some crucial characters like Taapsee and Kirti not fleshed out completely, Mission Mangal makes for an entertaining Independence Day watch. That seems to be how the director intended it as well, a space-entertainer, rather than a hardcore scientific film. The flight might face some turbulence but it lands well.