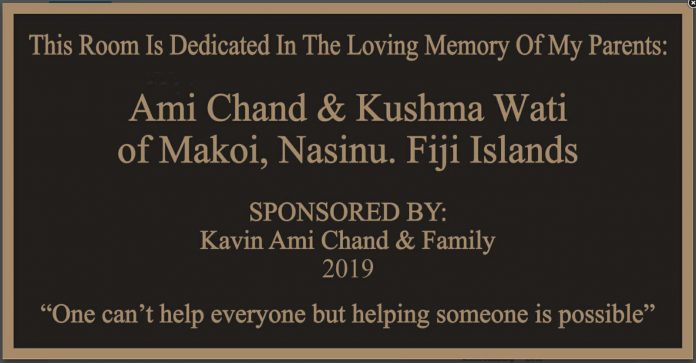 HE lost his father at a very young age, and when he was 20 years old, his mother passed away.

After migrating to Canada in 1997, 46-year-old Kavin Chand, a Surrey-based businessman, continued his good family tradition helping others by engaging and serving with local community work.

Chand, a former resident of Nasinu Fiji, followed in the footsteps of his father and a brother, who passed away in Fiji a few months ago. Both were deeply involved in community service in Fiji. Chand saw the urgent need for the senior’s home for the Fijian community. He donated $5,000 to PICS’ senior’s home.

PICS, founded by Charan Gill in 1987, is a non-profit society and has been serving the local community since then, providing a broad spectrum of programs and services that assist new immigrants, seniors, women and youth.

In the late 1990s, the society recognized a growing need for subsidized housing and care for seniors from multicultural communities. With funding support from the community and BC Housing, PICS was able to build two separate facilities: a 77-unit Independent Living Facility and a 49-unit Assisted Living Facility.

Just steps from the Strawberry Hill Shopping Center and within walking distance of churches, temples, mosques, gurdwaras, libraries and other amenities, these two complexes house up to 260 individual seniors.

At present, Fijians constitute 43 percent of residents there and many more are on the waiting list.

Recently, PICS directors honoured Chand with a life membership with a plaque. He is the first Indo-Fijian Canadian to receive this honour.

At the PICS Senior housing village, Chand has adopted a room in memory of his late parents Ami Chand and Kushma Wati of Makoi, Nasinu, Fiji Islands.