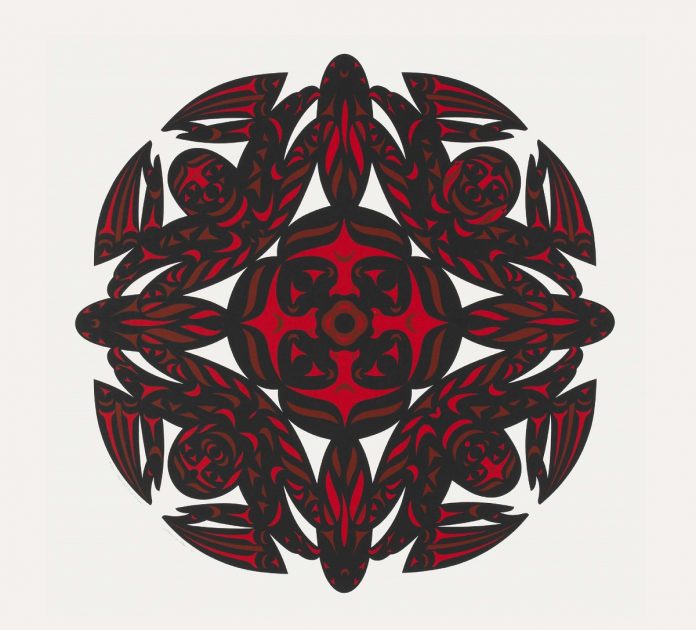 SURREY Art Gallery is to host a travelling exhibition of works from one of Canada’s foremost artists. Susan Point: Spindle Whorl, on tour from the Vancouver Art Gallery, opens on January 25. A curator’s tour with Vancouver Art Gallery curator Grant Arnold will begin at 6:30 p.m., followed by a reception at 7:30 p.m. Admission is free.

Susan Point is renowned as one of Canada’s leading innovators in the fields of contemporary and Indigenous art. She has pioneered the revitalization of Coast Salish artthrough her works in jewellery, sculpture, printmaking, public art, and more. Her artmaking celebrates the vibrancy of traditional Coast Salish culture, while firmly situating it within the present moment.

Spindle Whorl features screenprints developed by the artist over the past four decades. Each one uses the motif of the spindle whorl—a small, round (usually wooden) disk traditionally used by Coast Salish women to prepare wool that would be woven into garments and ceremonial blankets. In her art, Point beautifully adapts the whorl as a vehicle for symbolic meaning, reinventing and adorning it with animals, the forces of nature, mythological creatures, and other, more abstract design elements.

For Point, the spindle whorl is not only a way of connecting with her heritage, but a means of developing visual ideas. In many instances, traditional motifs such as salmon, eagles, crescents and moons intertwine, transform, and meld into each other, producing strikingly original imagery. In conjunction with an innovative use of colour, Point’s works present us with unprecedented combinations of patterns and forms. This commitment to the exploration of the whorl has inspired generations of younger Coast Salish artists, and expanded the realm of visual expression.

“I have to say that I have been fortunate in that my artistic expression is rooted in my Coast Salish cultural foundation,” says Susan Point in her artist statement, “however, I consider myself a contemporary artist. Traditionally, the Salish peoples on the Northwest Coast never ever exploited the stories or meanings behind their cultural pieces (which we now call art) as they were private portrayals of family and history. When I design and work on a piece, regardless of medium, there are countless stories, thoughts and memories that go through my mind. I am redesigning the artwork all the time … to challenge myself and to experiment and express my ways of always being original.”

In addition to the opening night curator’s tour, Susan Point will visit Surrey Art Gallery for an artist’s talk on February 19 at 6:30 p.m.

The January 25 opening reception will also celebrate Surrey Art Gallery’s other winter exhibits, including: Don Li-Leger: Counting the Steps of the Sun, a wildly colourful series of paintings and videos made by the late artist in response to the 2017 wildflower “super bloom” in the Southwestern United States; How Green is Your Muse?, a celebration of nature in artworks by the Filipino Music and Art Foundation; and Varvara & Mar: We Are the Clouds, which transforms ordinary faces into clouds projected across a blue sky on Surrey UrbanScreen at Chuck Bailey Recreation Centre.

Susan Point is a Musqueam artist based in Vancouver, British Columbia. Point was born in Alert Bay, BC, and grew up with her family in their home on what is known as the Musqueam Indian Reserve near the mouth of the Fraser River. In the early 1980s, Point became interested in reviving the traditions of Coast Salish art and design. She first began making art in 1981 when she took a jewellery-making course at Vancouver Community College. Her work has since helped revive Coast Salish design and brought new scholarly attention to her culture. She was the first Musqueam artist to have a solo exhibit at the Vancouver Art Gallery. Point’s public works include pieces installed at the Vancouver International Airport, Stanley Park, the National Museum of the American Indian in Washington DC, and the UBC Museum of Anthropology. She has been widely recognized for her work, most recently with the Audain Prize for Lifetime Achievement.