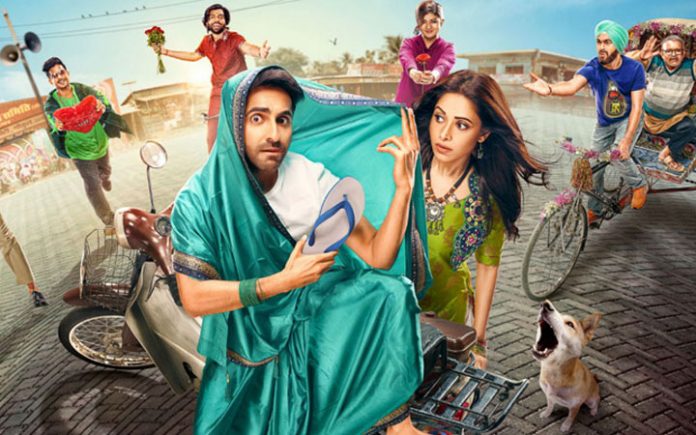 Over the years, Ayushmann Khurrana has become nothing short of a brand. He attained success with quirky and urban comedies. Last year, he surprised as he switched gears with ANDHADHUN, a thriller black comedy and earlier this year with ARTICLE 15, a no-nonsense crime drama. Now this talented actor will be seen in DREAM GIRL, a thorough commercial fare, his first ever. The trailers and songs have done the trick and the film is carrying a lot of expectations. So does DREAM GIRL turn out to be a well-made entertainer? Or does it fail? Let’s analyse.

DREAM GIRL is the story of a man masquerading as a woman to earn his living. Karamvir aka Karm (Ayushmann Khurrana) is an unemployed youth in Mathura who is desperately looking for a job. His father Jagjeet (Annu Kapoor) runs a shop that sells funeral items and has taken a huge loan. The recovery agents have been harassing him over unpaid dues. Karm is known locally for playing female roles in plays and Jagjeet detests this side of Karm. One day while returning home from an unsatisfactory job interview, Karm comes across an advertisement for a call centre job. Karm reaches the venue and is surprised to know that it’s a Friendship club involving women calling men and talking seductively with them. The owner of this place, W Ji (Rajesh Sharma) however hires Karm when he realises that Karm can talk like a women very convincingly. Karm gets the job and he turns into Pooja. Karm does so well in his work that W Ji pays him handsomely and even gifts him a car. Meanwhile Karm falls in love with Mahi (Nushrat Bharucha) and both get engaged. Once Karm repays the loan of his father and gets settled in life, he realises he no longer wants to be Pooja. But W threatens Karm that he’ll tell his father, Mahi and everybody in the neighborhood about how he seduces men daily by assuming Pooja’s identity. Karm hence continues his work. He also realises that he is in for a bigger problem as four of his customers – Mahendar (Abhishek Banerjee), coincidentally his to be brother in law, a hot headed teenager Toto (Raj Bhansali), a cop-cum-shayar Rajpal (Vijay Raaz) and a man-hating journalist Roma (Nidhi Bisht) are crazily in love with him or should we say with Pooja. If this is not enough, Karm’s father Jagjeet too starts talking to Pooja and wants to marry her. What happens next forms the rest of the film.

Nirmaan D Singh and Raaj Shaandilyaa’s story is excellent and it has a very wide appeal. It is reminiscent of the 90s David Dhawan, Govinda comedies. Hence there’s also a nostalgia value attached to the plot. Incidentally the manner in which Karm hides his real profession from his near and dear ones gives one a déjà vu of Ayushmann Khurrana’s debut flick VICKY DONOR (2012). Nirmaan D Singh and Raaj Shaandilyaa’s screenplay is terrific as the writing packs in so much in 132 minutes. Often, great idea goes kaput at the screenplay level. In case of DREAM GIRL, the screenplay enhances the winning plot. Raaj Shaandilyaa’s dialogues further add to the fun and madness. The one liners are so smart and naughty that viewers will be amazed with the writer’s wittiness.

Raaj Shaandilyaa’s direction is superb, especially considering that it is his first film. He handles the man-talking-in-woman’s-voice bit very nicely. He also has a bit of an experience since he has scripted Kapil Sharma’s show which involves drag acts for laughter. But in this case, Raaj is not only writing but also executing the content and in all departments, he shines. It’s a bit slow in the beginning of the second half and some of the references to religion might not be liked by a few. But these are minor cons. What’s also praiseworthy is that he makes an important comment about loneliness in the society that drives so many men (and women) to resort to a Pooja.

DREAM GIRL begins with a bang and makes it clear that it is laced with some smart writing and smooth direction. Not much time is wasted and in no time, Karm turns into Pooja and begins the seductive game on call. The romantic track is not that exciting but has its moments and keeps the interest going. The intermission point is a big surprise. Post interval the film drops initially. But it goes on a high when Jagjeet goes crazy over Pooja and goes to insane lengths. This bit is going to bring the house down! The climax is a bit serious but works well.

DREAM GIRL is embellished with some fine performances and Ayushmann Khurrana shines the most. This is his most massy role yet and he hasn’t done such a part before. But he slips into his character effortlessly. He also sheds his inhibition beautifully. To see him emoting and dancing like a woman while talking like Pooja is a joy to witness on screen. DREAM GIRL will go a long way in getting mass acceptance for Ayushmann. Nushrat Bharucha has lesser screen time but makes her presence felt. Annu Kapoor raises maximum laughs among all the lovers of Pooja. Initially he doesn’t make an impact but in the second half, he’s a riot. Vijay Raaz comes next. His part is adorable and is sure to chuckle audiences with his shayaris and comic timing. Nidhi Bisht is apt for the part and she also has a unique background score reserved for her. Raj Bhansali is effective. Manjot Singh (Smiley) is too good as the sidekick. Abhishek Banerjee gets a bit overpowered by so many actors around but is good nevertheless. Neha Saraf (Chandrakanta) makes an impact as Vijay Raaz’s wife. Neela Mulherkar (Mahi’s grandmother) is very funny. Rajesh Sharma is as good.

Meet Bros’ music is foot tapping and suits the narrative. ‘Radhe Radhe’ is grand and makes for a great watch. ‘Dil Ka Telephone’ is the best of the lot and very well placed. ‘Ik Mulaqaat’ looks a bit forced but is soulful. ‘Gat Gat’ is played in the end credits. ‘Dhagala Lagali’ is missing in the film. Abhishek Arora’s background score has the massy feel.

On the whole, DREAM GIRL is a laugh-a-minute-riot that fulfills all the expectations. At the box office, it has the chances of scoring big time with its target audience and is likely to enter the 100 crore club.