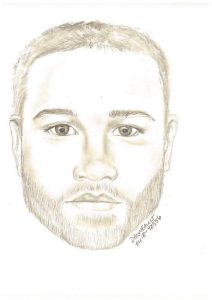 SURREY RCMP are advising the public about an ongoing sexual assault investigation and is releasing a composite sketch of a suspect.

The suspect is described as an adult male, possibly mixed race or indigenous. He is approximately 5’8 – 5’9, short black hair, a short well-groomed beard, brown eyes, flat broad nose. At the time of the incident the suspect was wearing blue basketball-type shorts with a stripe down the side, a blue matching jacket and a white shirt, and had a black backpack.

Surrey RCMP received the report on April 9 and immediately began an investigation. A composite sketch has been created of the suspect and is being released to the public. Anyone with information that will help identify the suspect is asked to contact the Surrey RCMP.

Investigators are also seeking potential witnesses who may have been in the park at the time of the assault. Anyone who may have seen or heard anything that may relate to this incident is asked to contact Surrey RCMP at 604-599-0502.

If you wish to make an anonymous report, contact Crime Stoppers at 1-800-222-TIPS or www.solvecrime.ca.

Foul play suspected in the disappearance of San Li Liao of...