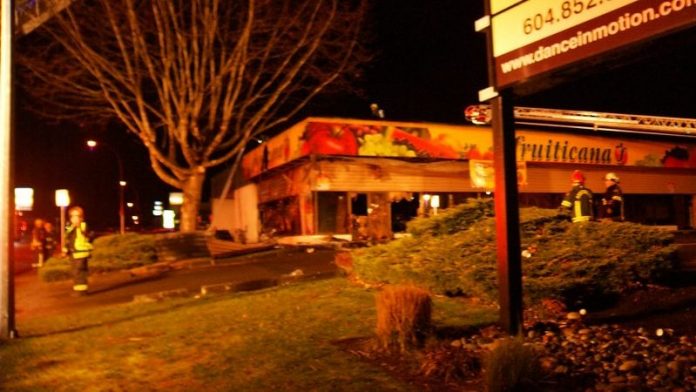 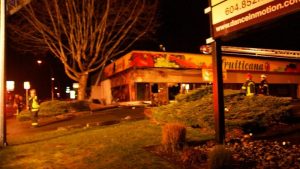 ON Friday, at 4:15 a.m., a witness observed flames and smoke coming from a recently renovated business in the 2700-block of Bourquin Crescent. Abbotsford Fire Rescue Service crews battled the blaze which consumed a portion of the building and caused substantial smoke and water damage to the structure.

Sgt. Judy Bird told The VOICE that a Fruiticana grocery store was being set up in the building.
Shortly before the 911 call, five individuals, at least one of whom was a female, were observed throwing rocks at the windows of this business.
The witness immediately dialed 911 to report the fire. The witness also advised that the same suspects were last seen running westbound on Ventura Avenue after the fire began.
Abbotsford Police Department Major Crime Unit detectives and Forensics Identification Unit are working with AFRS to determine the cause of the arson. APD investigators are canvassing for video and additional witnesses. Anyone with information about this investigation is asked to contact the Major Crime Unit of the Abbotsford Police Department at 604-859-5225 or call Crime Stoppers at 1-800-222-8477.