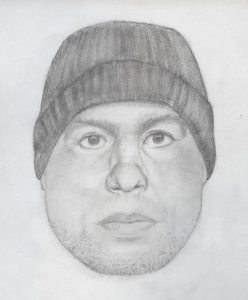 THE Major Crime Unit of the Abbotsford Police Department on Saturday released a composite sketch of the suspect who assaulted a 23-year-old woman on November 14 in the hope of identifying him.

The assault occurred at 9 p.m. in the 31000-block of Maclure Road.  The male followed the young woman for a block before pushing her from behind and attempting to restrain her.  The woman was able to free herself and run to safety. The victim did not require medical attention.

CCTV cameras captured the male moments prior to the assault.

The suspect is described as a chubby white male in his 30’s, standing approximately 5’10”.  He has black patchy facial hair, and was wearing a black toque, an old black kangaroo-style hoodie and grey baggy sweatpants.

If anyone recognizes the man depicted in the sketch or has information about the assault, they should contact the Abbotsford Police Department at 604-859-5225, email them at [email protected], or call CrimeStoppers at 1-800-222-8477.